This was revealed by Byron Clatterbuck, CEO of Seacom, in an exclusive interview with ITWeb on Friday. The fibre link was lit up last week.

Although Clatterbuck was cagey about exactly how much the company invested in the fibre, he hinted it pumped about R100 million into the facility.

The new development comes as Seacom is busy lighting up the fibre assets of FibreCo, a company it acquired in November last year.

“When we bought FibreCo, it was a company that was good at building fibre and selling fibre to other companies. We bought FibreCo and we are lighting it up,” said Clatterbuck.

“We are happy to announce that we have lit from Johannesburg to Cape Town at one terabyte. We are very good at lighting fibre and managing people’s networks,” he added.

Clatterbuck noted Seacom previously only had capacity from Durban up to Johannesburg.

Following the lighting up of the Johannesburg to Cape Town facility, the next destination for Seacom will be East London, said Clatterbuck.

“This gives us the ability to offer our customers more services. It also enables us to connect all the smaller towns along the way.”

However, he noted the fibre connection linking the two cities is not something unique to Seacom as other players also have networks there. The difference is the 100GB technologySeacom uses.

“We always design our networks using fibre because that’s the most economical way to transmit light and data, and then we put equipment on it that can scale. So for us, we put equipment like a chassis that sends light beams down to that fibre, starting at 100GB for each beam.

“So, in this case, we put 10 light beams to get a terabyte. If we need another terabyte, it takes us only three weeks to add it.”

The fibre push is part of Seacom’s business strategy of diversifying from the over-reliance on its subsea cable business.

Although Seacom recently said it is upgrading its subsea cable systems’ lit capacity from 1.5TB to 3TB this year, the company is expecting more competition in the submarine cable business with new players set to enter the fray.

Google is set to launch its Equiano cable that will connect Africa with Europe. Once complete, Equiano will start in Western Europe and run along the West Coast of Africa, between Portugal and SA, with branching units along the way that can be used to extend connectivity to additional African countries.

“In the future, we see there are new cable systems that are coming and we believe this is a good thing for African consumers and businesses,” Clatterbuck said.

“This is because if you look at a lot of big markets – for example, connection between Europe and the US – there are about 18 cables. However, in Africa there are only three high-speed cables and they are getting older.”

Thus, he commented, the idea of new cables has to happen as this will result in cheaper bandwidth and add the much-needed resilience.

“We always knew these new cables were coming. When we started, we knew that trying to stay in just one wholesale commodity superhighway business was not a sustainable long-term business model.

“That’s why five years ago, we started Seacom Business in order to get customers on our network and put more investment into fibre in South Africa and in Kenya. We are also pushing for more metro connectivity options that we own and control. That’s why we acquired MacroLan, SAI and FibreCo.”

Seacom is also working with other providers such as DFA to ensure the company has fibre connectivity solutions.

There is a lot of investment still required in the African and South African fibre markets, Clatterbuck noted. “If you look at South Africa, probably the most developed market in Africa, and look at fibre penetration, it’s still quite low.”

He noted the US just reported 50% of its commercial buildings have fibre. In South Korea, it’s about 80%, he said, adding SA has only about 6% and for the rest of Africa, the penetration is probably 1%.

“We are continuing to add more and more metro connectivity because in the subsea side of the business, when the volume goes up, the price goes down. So we believe we have to take that capability and drive it close to the customer.”

Earlier this month, Seacom announced its Bloemfontein node is now live, enabling the delivery of a wider range of business connectivity products to the city.

The submarine broadband provider already has over 60 points of presence across SA, including major data centres in Johannesburg, Cape Town and Durban.

By leveraging its existing national fibre backbone and international fibre subsea cable infrastructure across both the West and East Coast of Africa, Seacom offers connectivity scalable to Gigabit levels as business requirements grow.

Seacom’s national network also connects to its subsea cable system, which lands in Mtunzini on the East Coast of SA to the WACS cable, which lands at Yzerfontein, on the West Coast of SA, enabling fully redundant high-speed ring protection. 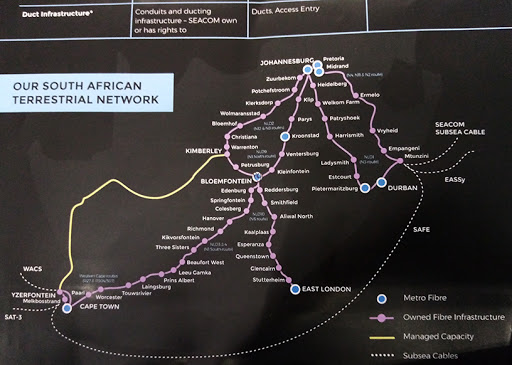